A beautiful memory from the Visceral album launch last November. I was joined on stage by the wonderful artists Xina Hawkins, Artem Zaytsev, Shingo Masuda, Petros Tzekos and Meta Morphosis Performance. Big thanks to Roberto Zanrosso for the video.

My new album Visceral is out today! Order your copy in digital or physical format from my Bandcamp or via Hymen Records. Berlin-based artist Doris Behring has beautifully hand-crafted a limited edition cover which you can order now.

I recently had a chat with the lovely Marianne at Book a Street Artist, Berlin about the upcoming album and "exploring underneath". Photo by Seagull. 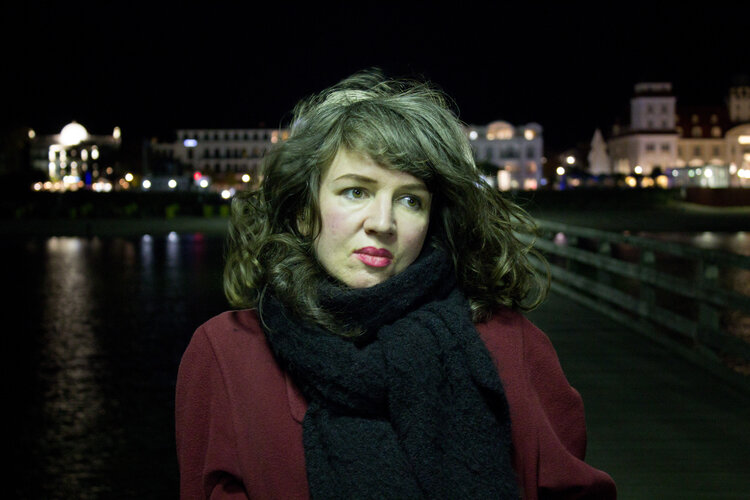 With just 3 weeks to go until release day, I'm excited to share another track from my upcoming album with you. Here's "Storm in a Teacup" together with a film clip I shot on the hauntingly beautiful island of Lanzarote, Spain.

Very excited to share the first single "Cousteau" from my upcoming album "Visceral", to be released on Hymen Records on November 29th 2019.

I’m thrilled to announce the release of my upcoming album “Visceral”. It’s been a long time coming but finally the work is complete and ready to be set free!

On Friday November 29th, there will be a worldwide digital release on Hymen Records and a live album launch at BLO-Ateliers, Berlin. More details to follow. For now, here is the cover artwork made by Irish fine artist, Marty Kelly.

Working on my new album "Visceral" with Mario Engelter at the impressive Studio K61, Berlin.

A new album is in the making...
A few snaps from recent recording sessions in Berlin with the talents of Petros Tzekos (percussion), Xina Hawkins (viola), Artem Zaytsev (guitars) and Jorge da Rocha (double bass).

Cellist Nikolaus Herdieckerhoff and I are excited to share, we are now ... RE!SE.
Next weekend we'll be taking our maiden voyage as RE!SE at Culture Container, Berlin.
Artwork by the talented Bart Sparnaaij.

Earlier this month we premiered the theatre play Das Labyrinth der Unerwünschten at ufaFabrik Internationales Kulturcentrum, Berlin. It was a wonderful evening with the team from CamelStudios & East Side Delta capturing some special moments. We look forward to presenting it again for you in 2018!

WORK IN PROGRESS: Currently writing the music for an exciting new theatre production to be premiered on December 6th at UFA Fabrik, Berlin. Created by the talents of Veronica & Giacinto Compagnone and starring actress Olivia Beck. Honoured to be working on this dream opportunity and enjoying the creative process of exploring intuitively through a playground of boundless possibilities.

New video for "The Idea of You" from my album Treasure Pleasure. Filmed and produced by the talented Rice Master Yens and starring Artem Zaytsev in his acting debut.

New recording of "Dan Organ's Milk" - unplugged and with a hint of whiskey.
With the talents of Kaio Moraes & Artem Zaytsev, recorded by Charrua at Kern, Berlin.

Stephan Noë from MUSIKMUSSMIT recently popped by for a visit, armed with a camera and a mic. Here is Nikolaus Herdieckerhoff, aka Cellolitis, and myself performing a one-take version of "From Gagarin's Point of View" by E.S.T.

Happy International Women's Day! I'm delighted to be a part of the Book a Street Artist article today about women in the arts. Thanks to the lovely team at BASA Berlin.

Last weekend I visited the town of Madgeburg and performed at Volksbad Buckau. Here's a lovely write-up and collection of photos from local photographer Wenzel Oschington.

New live video of Inertia with Aussie electro-percusionista Trim Foley at this summer's Querfeldein Festival in Marxdorf, Germany. Before Tim heads off south we'll play our last show together on October 7th at Artliners, Berlin.

My new album "Treasure Pleasure" is out now on Cult Classic Records! Available for purchase and streaming via Bandcamp. I hope you enjoy listening through! We had a wonderful album launch at Neu West Berlin, you can view photos from the show on facebook.

Pre-release single DAN ORGAN'S MILK is here! From my upcoming album "Treasure Pleasure" out on Cult Classic Records June 17th. Super 8 footage filmed and edited by my Dad, John W. Morley, on the Concorde's first visit to Australia in 1972.

My new album "Treasure Pleasure" will be out the 17th of June on Cult Classic Records. To celebrate, there will be an Album Launch that evening at Neu West Berlin with a 4-piece band and special guests. Just 1 month to go!

New live video! Here Kaio Moraes and I perform "Gnossienne No. 1" by Erik Satie, taken from my last album Water Door. Recorded live at the wonderful Culture Container, Berlin. During March we'll be playing at Not Only Jazz and Fabisch, we hope you can join us!

Happy New Year to all! I'm very excited to be kicking off 2016 with a trip back to my old stomping ground, Barcelona. I'll be busy working on my album and playing a few shows around town with Mr. Jorge da Rocha. Nos vemos pronto Barcelona!